Dialing in your Trading Performance Most traders use monetary results to determine how they’re doing day-to-day. On the one hand this makes sense given that for many of you money is the primary motivator and PnL is like a scoreboard charting exactly where you stand. On the other hand, focusing too much on daily and even weekly or monthly results can cause your emotions to get out of control and problems to arise—many of them costly.

An excessive focus on results causes your process to break down. You end up focusing too much on intraday profit, locking in winners too early, doubling down on losers, looking for outsized profits, ignoring your own rules or trading outside your system looking for instant results. You disregard elements of your decision-making process, like risk management, and take trades with a smaller edge, or even with no edge at all. You jump into new markets without considering your lack of experience in those markets. Your emotional state goes on a rollercoaster. Riding a wave of successful trades you’ll get overconfident and greedy, or, after a series of losses, fear, anger and lack of confidence will take you down further.

Plus, trading is full of unknowns and even the factors that are known have huge amounts of variability, with swings that can drive you mad. Outside of the obvious scenarios where good and bad luck occur, there’s a myriad of scenarios where accurately judging the influence of variance is a fool's errand. Misperception thrives in situations like this, and for less experienced traders it can be their undoing.

For all these reasons, short-term PnL is a poor measure of your performance as a trader. The false feedback can make your head spin. If you’re going to keep your head on straight you need a better source of feedback than PnL. While you’ll never be numb to the ups and downs of your PnL, in an ideal scenario you are instead focused and emotionally invested on what matters most in the short-term—the quality of your execution and decision-making.

About a decade ago I created a tool called the A to C-game Analysis to help clients, mostly poker players at the time, with a better way to measure their performance. Since then it has become one of the centerpieces of my system because it’s so valuable for emotional stability and execution. Put some effort into personalizing your own A to C-game Analysis, and your PnL will thank you.

Create an A to C-game Analysis

Imagine having the power to see exactly where the line is between variance and your skill. It would take a lot of the uncertainty out of trading and make your confidence much more stable. On days when you got crushed, but upon reflection wouldn’t change your decisions, you wouldn’t feel as bad as you do normally. On the flip side, on days where you make an insane amount of money, but they resulted from a series of errors you made that happened to work out, you wouldn’t feel as good. Obviously, no one has this power. But the idea of having a more objective way of evaluating your skill should immediately make sense.

The tool is straightforward. Essentially, you identify the key descriptions of each level—A-game (your best), B-game (average), and C-game (worst)—and separate your mental game from your tactical skill. Here’s a sample to give you an idea of what it looks like: 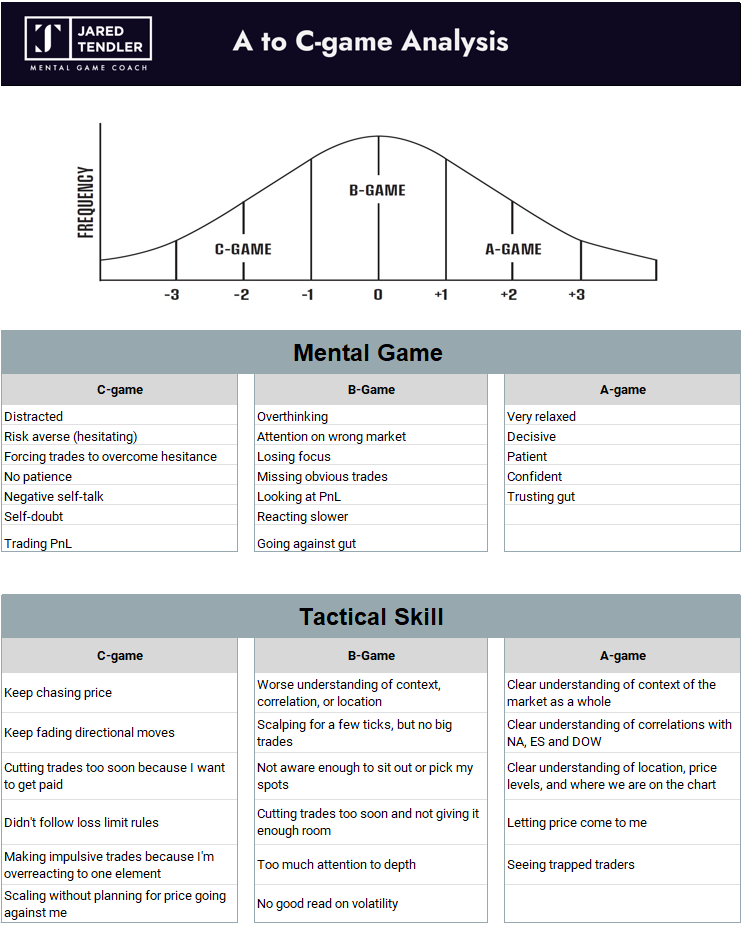 How do you actually create an A to C-game Analysis for yourself? The first step is to brainstorm three different levels of your game both mentally and tactically. You want to get an accurate picture of your performance, so focus on the last 3 to 6 months. Anything less than that and your A to C-game Analysis is likely to be skewed towards the negative or positive based on how you’ve been doing recently.

The easiest way to start out is by focusing on the parts of your performance that are the most obvious. For my clients that means their A-game and C-game. Focusing on the two extremes is easier, and then once you’ve got that nailed down, you can fill in B-game.

Here a few tips to help:

The goal is to get your A to C-game Analysis to a point where you stop finding new things to add. That could take you a few days or a few weeks, or even longer if you have to go through different cycles to nail it down. Don’t worry, even just thinking about your performance in these terms is helpful.

Once it’s solid, you now have a measuring stick that you can use to grade your performance daily. Many of my clients will keep theirs open and refer to it throughout the day, both to get feedback on how they’re doing and to gauge their mental state before taking discretionary trades. And you guessed it, doing this also helps you to improve how you handle luck by focusing you more and more on your performance, and less on short-term results, regardless of whether they’re positive or negative

Handling bad variance is a game of: How well can you maintain an accurate view of your results. Don’t let variance torment you and force your perspective on your system to become inaccurate. Do the work to create an A to C-game Analysis and it will keep you level-headed.

Ultimately your success is determined by the amount of money you make, but when results dominate your intraday focus, it’s easy to lose sight of how you actually make money. The A to C-game Analysis gets you to focus more on your daily execution, and allows you to measure your performance in a practical way.

Jared Tendler, MS is a mental game coach for world champion poker players, PGA Tour players, sports bettors and financial traders from 45 countries. He is the author of three highly acclaimed books, including his latest book The Mental Game of Trading. Find out more about Jared’s work at: https://jaredtendler.com/